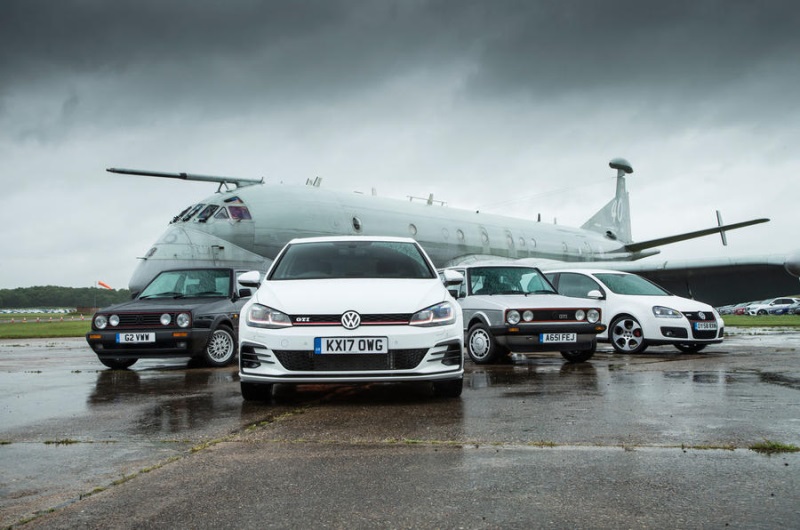 Golf Mk1 – 1974 to 1983
Replacing a bestseller like the people wagon was not easy. The bubble had dominated the market for several decades with its rear-mounted engine and rear-wheel drive. Now it was replaced by Golf with a front mounted, transverse engine and front wheel drive. Golf Mk1 was designed by car designer Giorgetto Giugiaro and as early as October 1976 Volkswagen was able to celebrate one million manufactured cars. A total of seven million copies of the first generation Golf were sold.

Golf Mk2 – 1983 to 1991
The second generation of Golf involved technological advances such as a lambda probe-driven catalytic converter, lock-free brakes and the car’s first four-wheel drive model. By June 1988 Golf had already passed 10 million manufactured cars and after 6.3 million manufactured cars, the second generation Golf was also phased out in 1991.

Golf Mk3 – 1991 to 1997
With the third generation of Golf, airbags were introduced until 1992. In Mk3, the first six-cylinder engine (VR6), the cruise control, the first oxidizing catalyst for diesel engines, the first direct injection diesel engine and the first side airbags were also presented. In May 1994, Volkswagen celebrated that it had manufactured 15 million of Golf. The third generation was phased out in 1997, when 4.83 million cars had been manufactured.

Golf Mk4 – 1997 to 2003
In conjunction with the launch of the Golf Mk4, the model was offered with ESP and a year later, for the first time ESP became part of the serial production in Germany. The Golf GTI 180 hp was launched in 2001 and was followed up in 2002 with the first Golf to have direct injection gasoline engine (FSI). The same year, the sportiest model ever was launched: R32 with a top speed of 250 km / h. The following year, the Golf R32 was the first to offer a dual-clutch gearbox (DSG). A total of 4.99 million cars were manufactured by Mk4.

Golf Mk5 – 2003 to 2008
With the laser-welded body, the torsional stiffness of the Golf Mk5 could increase by 35 percent. This was also the first time you could get a Golf with optional side airbags in the back seat. Other news was the first direct-injection turbocharged petrol engine in the Golf GTI, as well as the world premiere of Twincharger with both turbo and compressor power. When Golf Mk6 was launched in 2008, 3.4 million of the Mk5 had been manufactured.

Golf Mk6 – 2008 to 2012
Another airbag was launched by default: the knee airbag. New assistance systems such as spotlight control, Park Assist, Hill Start Assist and technology such as adaptive chassis control helped Golf to be named “World Car of the Year” in 2009.

Golf Mk7 – 2012 to 2019
A slimming Golf that reversed the trend with increased weight for each new generation. Now Volkswagen managed to reduce the Gulf’s total weight by 100 kilos. In addition, the model came with a new set of assistance systems. Here we find the adaptive cruise control ACC and the near-field surveillance Front Assist including the City Brake City Emergency Brake. To date, about 6 million Golf Mk7 have rolled out through the factory gates.