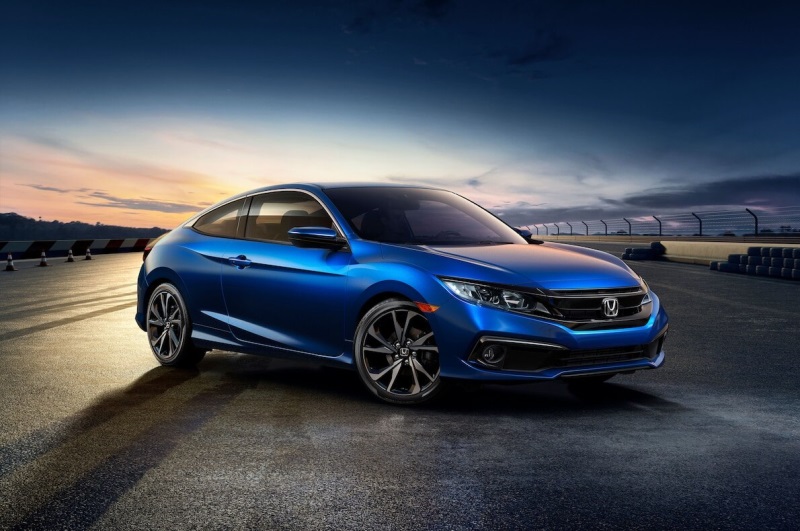 I traded a 2004 Toyota Camry LE (2.4L 4-cyl) with 234k miles for this 2019 Honda Civic EX Hatchback in Aegean Blue, and it will replace the Camry as my daily driver. I’ve never owned a Honda at all, so everything will be from a fresh perspective as I cannot comment on improvements over generations or anything like that. Also of note, I own a Dodge Charger R/T which I consider a larger sedan, but I barely drive it so I’ll use it for a few comparisons but not for an overall evaluation between the two.

First, the advantages:
The exterior style is amazing. Definitely a head turner when I’m driving down the road. People will always comment on the color and/or look of it. It has a definite aggression in a small package that newer cars seem to have. Having two smaller kids, the 4-door model was more what I was looking for. While it’s small enough that I can look over the whole car and even reach the middle of the top with no effort, I still don’t feel like I’m sitting on the road like I do in other lower-riding vehicles.
The interior is a bit more compact than I’m used to, but that’s not a bad thing. I was looking for a smaller vehicle; the Camry was very spacious and comfortable, and I knew I would be sacrificing some of that leg and head room in a smaller car, but did not want to sacrifice comfort. I once test drove a 2014 Ford Escape and when I shut the drivers door, I was immediately crammed into the drivers side with what I felt was no leg room. With the appropriate expectation, the Civic actually makes fantastic use of the space it’s given. I’m average height but I drive with my back more vertical than most drivers. I can almost hit the top with my head but I don’t feel crammed. My legs lie to the sides or flat on the floor mat like normal without feeling cramped. I also love how everything is within reach; in comparison to the Charger, when I need to reach for things on the dash I have to lean forward a bit; with the Civic I can stay put in my seat and reach almost to the passengers door handle with little to no total upper body movement. In comparison to the Camry, I almost never had to reach across the front end, so I would say everything is actually placed more efficiently in the Civic, but we ARE talking about 15 years in automobile design differences, so that is as I would expect.

As far as the extras, wow. There are things standard on this car that I never knew even existed. Like I said, I’m used to my Camry that still had a working TAPE DECK that I used! I’m not going into detail on all of the extras, but I will touch on the highlights. Most of these you must experience for yourself to see how they work. Lane Keep Assist works very well on highways, but I’m in rural and suburban Kentucky so… our roads aren’t always marked with lines for the system to identify. Adaptive Cruise Control works well and keeps pace. Lane Departure Mitigation, Android Auto/Apple CarPlay, and all the other cool things that are part of the package all work very well, if somewhat confusing to me right now, but with time, I’m sure I can figure out everything.
Let’s talk about performance. The Camry had a gradual loss of power over the years, which is normal for a vehicle under the circumstances. I had it beginning in my youth, and to say that I never abused the engine would be a lie. However, it was as reliable as it was old, and I had more issues with my Charger in 2017 than I ever had with my Camry in 15 years. I went in with the expectation that the Civic with a 1.5L, even with a turbo, would be slightly less powerful than the 2.4L naturally aspirated Camry. I couldn’t be more wrong. This car has some serious pep that I wasn’t ready for. Going down the highway, I would switch between Drive, Drive w/Eco, and Sport mode. In Drive, you can tell that the engine is more reserved in it’s power, holding back during harder accelerations. Drive w/Eco is even more reserved to the point that I would only use this when I was cruising at speed behind another vehicle. In Sport mode, I found it easy to pass slower traffic without having to absolutely smash the pedal through the floor (like I had to do with the Camry) but it wasn’t MAD acceleration like with the Charger. I still had a feel of being in control of the vehicle like the wheels were solid onto the road, even in the rain (which it has done all day for the last 2 days since I got it).

Gas economy is another great advantage with 32 city/ 45 highway. I wasn’t able to achieve the full 45 highway but even just around town and here and there I’m averaging 35 mpg. The Camry was 24 at best in highway mpg.

The back seat surprisingly isn’t uncomfortable for my family. I had a different driver drive us, an adult passenger in the front seat, and 2 kids in boosters in the back along with myself. I had room to move and remain comfortable without feeling cramped. I was amazed.
The sound system is nice and clear. I haven’t had it loud and pounding yet, but my Podcasts are very clear and each word is crisp.

The UI of the touch screen takes some playing around to get used to it, but it works very well. The menus aren’t overly confusing, and the hard touch buttons on the side are a nice plus.
Now for the disadvantages:
While some of these disadvantages aren’t major disappointments, I feel that perhaps these are things that could be improved upon with some sort of update or upgrade, or perhaps they’re available in other trim models and I overlooked them. Being a new Honda owner, I may also not know how to switch things on and off correctly yet, so I may end up updating my review at a later time. 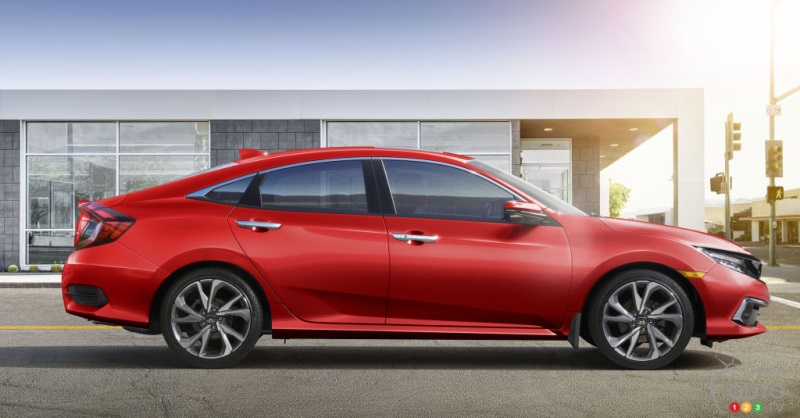 The biggest thing in my mind is the inability to turn Adaptive Cruise Control off. I’m used to regular cruise control on all my other cars, and they don’t follow cars or slow down when another car gets in front of me. With the Civic, it’s apparently this or nothing. Multiple times I would be cruising the interstate at 70 mph at a distance from another car and the ACC would latch onto a car ahead of me. Another car would get between us and the ACC would immediately start blinking the big yellow BRAKE overlay and slow me WAY down to match, to the point that I had to just turn it off. I had plenty of opportunity to continue my speed in the passing lane as the interrupting car was slower, but the ACC already had me down to 50 mph and the car was in Drive w/Eco for gas savings. Passing isn’t fantastic with Eco and requires a lot more pedal than I’m used to, so I just switched the ACC off. Annoying but as long as you have that expectation you know what will happen in these circumstances. UPDATE: I just read the manual about how to turn it back to standard cruise control by holding the interval button. Cross out this disadvantage!
I also wouldn’t say the ride is the greatest I’ve ever been in. The bumps in the road can be felt in the front and REALLY felt in the back seat, but I expected this after having ridden in stiffer rides before.

When it rains on the car, because of the size and shape of the doors, it tends to let accumulated water get inside on the seats when the door is opened.
Lastly, the engine (see picture). Holy moly. I’m a DIY kinda person. I did almost every major repair to the Camry and some to the Charger myself. Once I popped the lid of the Civic and looked under it, I took about 5 minutes to identify all the components, and prayed that I NEVER have to do anything to this Honda besides change the oil and spark plugs and top off or change the other regular fluids because there is a LOT going on under that hood. 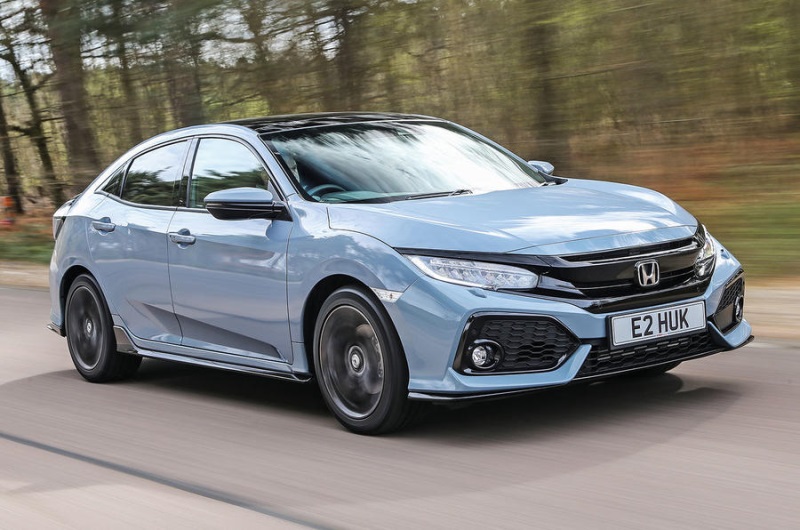 Overall, I would say that I made fantastic decision to go with this car. Honda is a great name brand, everything works just the way I would expect it to, and even the disadvantages are just minor annoyances that are alleviated by proper expectation. I love the way it looks and the way it drives, and I feel very comfortable when driving around in it and look forward to many years with this car!